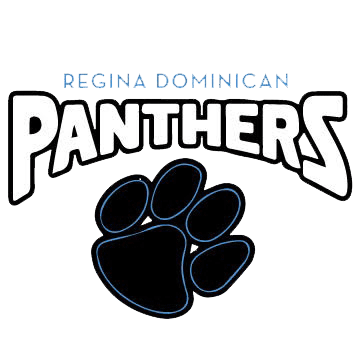 Panthers Official Sponsor
This past week we awarded the first-ever McDonell Award, recognizing the athletic team with the highest collective Grade Point Average (GPA) during a given sports season, to the Volleyball Panthers. “These athletes finished the season with a collective fall semester GPA of 3.48 on a 4.0 scale,” explained Athletic Director Brian Mancuso. “The term is ‘student athlete’ and ‘student’ comes first for a reason, we place high value on each player’s academic achievement,” he added. Commemorating this honor, there is now an engraved plaque hanging in the Regina gymnasium that recognizes the Volleyball team’s stellar academic achievements.
The McDonell Award is named in honor of former Regina Dominican Administrator Patricia “Pat” McDonell (center of photo in Regina sweatshirt) who retired in June 2019. She believed that academic and athletic excellence should go hand in hand.  Pat was a mentor, a leader, and a friend to everyone in the Regina Dominican community.  This award celebrates her legacy and will be given each sports season – fall, winter and spring to the qualifying team.
Panthers Official Sponsor

No Events This Week

Events are added by athletic staff.
View All Events